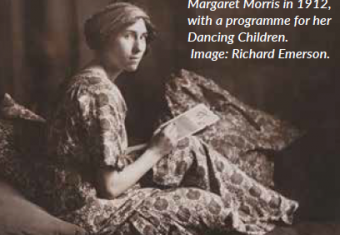 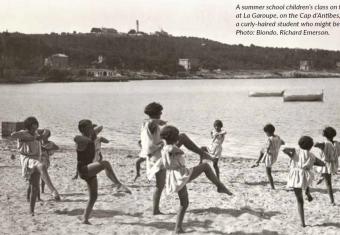 One showery summer’s day, not long after starting work on Rhythm & Colour, I went to see Jim Hastie and Robin Anderson in their cottage at Garelochhead. “You are younger than I thought,”Jim said on opening the door, “what are you doing interesting yourself in all this ancient stuff.” Without waiting for an answer, he led me through to the sitting room, a long room, one window looking down to the loch, the other to the garden. Jim sat on a sofa, Fergusson’s sofa made for his first studio in Edinburgh in 1902. Around the room hung paintings by Margaret Morris of her dancers, Kathleen Dillon and one of the Baddeleys among them, a big painting of the Bar Crystal hung over the fireplace, to its left was a chalk drawing of Loïs Hutton by Fergus, on the mantlepiece a small bronze of Margaret, occupying the place of the bronze of Jim on loan to the current MM exhibition in Perth. “I had to put something in its place, so that is why Meg is there”. A big, framed, Edwardian sepia photograph of Margaret stood on the table beside the sofa. On the sofa Jim, glittering with amusement in the gloom, toying with a cigarette, asked questions, two cat bowls beside him, two more on the floor, under the coffee table. Noises outside showed that Robin Anderson was not far away.

Jim talked about Fergus and Meg, they had kept in touch with Loïs and seen her every year. There was a Russian on a white charger who handed out her leaflets. He had seen the theatre in Saint-Paul. Why weren’t the French interested in this history? He gave me the addresses of Sonja Couzy and Evelyne Elbaz. If you wonder why there are so many MMM schools all over the world in funny places, that’s Sonja’s doing. Claude was in the diplomatic service and wherever he was posted she set up schools, now I have to go and visit them. Evelyne had met Hélène Vanel when she had an exhibition, where she was living... at the...” “Maison des Artistes”, I supplied, he nodded.

Meanwhile Robin had come in with a tea tray, home-made shortbread biscuits, two sorts, one dipped in chocolate and a cake.

Now it was Jim’s turn to disappear, coming back a few minutes later with a copy of Margaret Morris Dancing, of 1926, (the most beautiful book on dance ever produced), brand new, in its blue dust-jacket. “There is a box of these, they have been in the shed and have got a bit damp. The house is full of boxes of MMM stuff.’’ he complained ruefully. ”I started to go through it once but realised if I started I would never stop”, he eased the pages apart, some resisted “it will be all right when it dries” he said and gave it to me.

“They are worth a lot, we offer them as a raffle prize at MMM meetings; I tell them if you haven’t reached £100 forget it!” I felt that the (biggish) bag of Herbes de Provence and sun-dried tomatoes I had brought with me at Jim’s request, was a very inadequate swap and told him so. But it did not end there. Robin had been thumbing through a copy of Margaret Morris’ The Art of JD Fergusson which he and Jim had just republished and he now held it out to me. I said I would buy one in Perth but they wouldn’t hear of it so I asked them to sign the book, which they did “All best wishes for your book, Jim Hastie, Robin Anderson, 18th August 2010”. A week or two after that, two large photographs of the Loïs Hutton portrait arrived in Saint-Paul, whilst Sonja and Evelyne were given firm instructions to phone me.

In the following months, through the generosity of the IAMMM, the Margaret Morris Archive, was transferred from Garelochhead to Perth, rejoining Fergus’ papers at the Fergusson Gallery. During the next seven years I made my way through the letters, newspaper cuttings, programmes, drawings and photographs of the combined archives, falling under Margaret’s spell, as Loïs and Hélène had done before me, and the book grew to make room for her too.

Extraordinary things emerged from the boxes: Loïs’ diary of the 1921 Summer School at Pourville had already been noticed and very helpfully transcribed when it was cared for by IAMMM, but her follow-up diary had not. Between them they document the daily life of the school, Margaret’s chaotic finances and Loïs’ attempts to find love, most happily with Edna St Vincent Millay, the American poet. Her letters pick up the story where Lois’ diaries leave off.

In a tattered brown envelope among Margaret’s papers at the Fergusson Gallery were photographs of another Summer School at Antibes in 1926, one showing Margaret posing on a springboard at Eden Roc, now the playground of millionaires. Moments later the place on the springboard was taken by Ernest Hemingway, playing the fool in a top hat. Loïs and Fergus look on. As I pointed out in the article in the Daily Telegraph, it was Margaret who was famous, while Hemingway was still an unknown.

Margaret danced very little at these Summer schools. Loïs’ diaries and Margaret’s letters reveal her struggle with ill-health and stage-fright and a picture emerges of the physical and mental cost of her fight to keep her school from bankruptcy and her lifelong relationship with Fergus a secret.

Meanwhile, as well as sharing her memories of Hélène, Evelyne Elbaz gave me the number of Hélène’s friend, the dancer Maroussia Vossen. This proved a vital contact as Hélène had given Maroussia typescript drafts of her memoirs and poems, together with a notebook describing her dances, as well as dozens of press photographs. Like the MMMI, Maroussia was extraordinarily generous in allowing me to make free use of this material and in leading me to other young friends of Hélène, with their own memories and souvenirs.

Hélène’s draft memoirs describe her lifechanging encounter with Margaret in the winter of 1922, her early years at the school in Chelsea and the first Summer School at Antibes in 1923. She describes a row at the end of the 1924 Summer School, during which Fergus suggested Loïs should leave, and Loïs and Hélène’s decision to start their own school and dance troupe at Saint-Paul, the Studio Rythme et Couleur, which gives the book its name.

When in 1928 Loïs and Hélène started the theatre at Saint-Paul that would attract the poets painters, writers and royalty holidaying on the Riviera, they continued to send invitations, programmes and photographs to Margaret and Fergus, as they had from Paris in previous years. These turned up in a file at Perth labelled ‘Hélène and Hut’, in many cases they are the only known copies of these very ephemeral documents.

Detective work was needed to trace Loïs’ niece Ann Watson, who with her husband Peter, kindly looked out more photos, letters and programmes that Loïs had sent to her family in England and described their visits to Saint-Paul in the 1950s and 60s, where Loïs still ran her her theatre, giving me every encouragement and their permission to reproduce Loïs’ letters and diaries.

Margaret’s post-war visits to the Cap d’Antibes and her continuing friendship with Loïs and Hélène can be followed in her pocket diaries, which fill a box in the archive, and the ‘morning books’ in which she recorded her reading of the tea-leaves in her morning cup of tea and jotted down her day’s appointments.

A breather from the solitary work of writing came with the 2014 John Duncan Fergusson Exhibition held at the National Galleries of Scotland and then at Chichester, its curator, Alice Strang, was keen to showcase both Margaret Morris and JD Fergusson. I helped with the catalogue and Alice asked me to give a talk about Meg and Fergus’ friendship with Charles Rennie Mackintosh and Margaret Mackintosh and my discovery that the architect had come to her Antibes Summer Schools as a lecturer. The talk was published as an article in the CRM Journal, while in a postscript a year or two later, I described Margaret’s touching loyalty in caring for her friend in the final months of his life. This research also led me to a signed copy of Margaret Morris Dancing that Margaret had given to ‘Toshie and Margaret’ in 1927.

The last two years have been largely taken up with editing and designing the book. Jonty Daniels very kindly allowed me to use his father’s wonderful pictures of the MM dancers, which have proved as irresistible to the newspapers as they did when they were taken 90 years ago, while the JD Fergusson Art Foundation made a very generous and welcome grant towards its publication.

Jacqueline Harper’s invitation to visit and talk at the 2018 Summer School in Chichester was one of the highlights of a tumultuous year. It was a pleasure to talk about the book to such an appreciative and international audience and a revelation to watch the classes and the show, with new dances by Sara Lockwood and Chantal Bréavoine, as well as those that Loïs, Hélène and Margaret knew. It was fascinating to learn more about Margaret and her dances from Barbara West, Gail Borrows, Gillian Goldberger and Ruth Jeayes - proof that the MMMI from its oldest to its youngest participant is both a bright hope for the future and a living archive. It is an honour to be part of this extraordinary family, and I am delighted that the book has given you pleasure.

MMMI members can purchase a copy from me at a reduced price of £25, (rather than £35) plus £3.60 UK pp
Richard Emerson,Manna House, 7a High Street, UPNOR, Kent, ME2 4XG
or email richard.emerson@orange.fr