Jim Hastie (28/2/1936 – 17/11/2010) was well known in Scottish theatre as a dancer and choreographer and internationally as Artistic Director of Margaret Morris Movement.​ 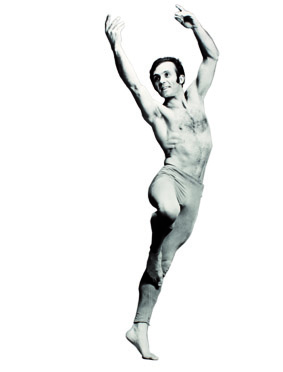 He was born in Bellshill, Lanarkshire and brought up in Overtown a small village near Wishaw. In his teens his first performing experiences were in the local church choir and he became interested in acting as a member of local Scottish Community Drama Association groups. National service interrupted this and he served in Cyprus in intelligence services. He returned to his drama interests and made two films with the award winning Scottish film maker Enrico Cocozza. 'Before Time Came', in which Jim played a leading role, is preserved in the Scottish Film archive. During this time he became involved in theatrical make-up classes organised by the SCDA which were held in central Glasgow in a studio hired from Margaret Morris's Celtic Ballet College. Jim was fascinated by the dance classes in the adjacent studio and took the plunge and began attending regular dance classes. Soon, after an audition with Margaret Morris herself, he gave up his day time job and became a fulltime dance student at the College.​

In 1960 Margaret Morris decided to have another attempt at forming a professional company and Jim appeared as principal male dancer at performances in St Andrew's Hall and Pitlochry Festival Theatre and subsequently, in the renamed group The Scottish National Ballet, during a tour of principal theatres in Scotland and the north of England. The tour lost money and Margaret Morris's husband the distinguished Scottish Colourist painter J D Fergusson had died. Thoroughly dispirited Margaret gave up the lease of the Celtic Ballet College with its well equipped little theatre at 299 West George Street.

Jim and several other students decided to head for London to continue their dance training. Jim worked in coffee bars and doing domestic cleaning to earn money to pay for his dance classes. He studied with Madame Cleo Nordi; a former soloist in Anna Pavlova's ballet company. After a year he was successful in landing a job with the opera ballet at the Stadt Theatre in Essen, where he took the opportunity to study with Kurt Jooss whose Folkwangschule was nearby and had the privilege of dancing the part of 'Death' in a student performance of Jooss's famous ballet 'The Green Table'.

In 1965 he moved back to London, doing the rounds of auditions for musicals and finally won the part of one of the four roustabouts in the American musical 'Carnival' which toured the provinces before opening at the Lyric Theatre in Shaftsbury Avenue. The principal lead Lily was played by Sally Logan who Jim was later to work with in summer revues in Scotland. Returning to Scotland he worked as a dancer in STV's 'Thingummy Jig' and also in the BBC's 'White Heather Club'. He then joined Andrew McPherson's touring group of singers and dancers called 'Hail Caledonia' which did a coast to coast tour of Canada and the United States. As principal dancer Jim caught the attention of the American impresario who decided to tour an Irish group the following year. He asked Jim to go to Dublin to rehearse the group and direct the show. Knowing next to nothing about Irish dancing Jim did an intensive course with one of Glasgow's teachers of Irish dancing and although the group had two all-Ireland champions, when the show hit the road it was Jim who won the plaudits with one critic naming him as the 'Irish Nureyev'! All this decades before Michael Flatley and 'Riverdance'. Jim said he had danced in every state of the US except for Alaska and Hawaii.

On returning to Scotland Jim became Dance Captain for the Bruce McClure Dancers who were in the line-up in all the major pantomimes and the highly successful revivals of the famous 'Five past Eight' revues. This were the last decade of the big Scottish musical shows with a full dance team of eight girls and four boys, lavish costumes and a full pit orchestra. He worked with all the big names of Scottish variety Stanley Baxter, Johnnie Beattie, the Alexander Brothers, Andy Stewart and the marvellously near-the-knuckle Hector Nicol.

The end of these big shows brought Jim to the next stage of his career. Recommended by the late Peter Darrell of Scottish Ballet to Scottish Opera's Peter Hemmings and Alexander Gibson, Jim became ballet master and movement coach to the Opera and also was responsible for a publicity and educational group for Scottish Ballet. He was particularly proud of the production of 'The Golden Cockerel' starring Bill McCue which he choreographed and danced in. A change of director several years later at Scottish Opera meant that a permanent ballet master and movement coach were no longer affordable and this led Jim to the final stages of his professional dance career although he continued to appear with Scottish Ballet as 'the Persistent Little 'Man'' in 'Cinderella', the 'Street Singer' in 'Napoli, and 'Bon Bon' in 'The Nutcracker'.

In 1980 Margaret Morris asked him to be her successor and to continue the work of expanding her system of dance and movement which was called Margaret Morris Movement (MMM). A grant from the Sports Council enabled him to spend all of his time working towards this end, Jim spent the next three decades developing and expanding MMM. This involved him in organising the International Summer Schools where new teachers were trained and travelling abroad on an annual basis to Japan, Canada, Switzerland, Germany, France and Australia where he conducted teacher-training courses. At the last count there were 325 registered teachers of MMM and nearly ½ million annual attendances at classes in many parts of the world.

During 2010 he was greatly involved in the MMM Centenary celebrations which marked the anniversary of the founding of Margaret Morris's first school in London in 1910. Unfortunately an ash cloud problems earlier the year prevented him from visiting Japan and his death occurred during the celebrations in Canada which he had been due to attend.

2010 also saw the gifting of the Margaret Morris Archive to Perth and Kinross Council. This wonderful collection, which Jim had cared for since 1961, consists of over 20,000 items including works of art, programmes, letters, photographs, costumes and diaries. The collection is housed within the J D Fergusson Gallery in Perth which already hosts the large collection of paintings, drawings and other archive materials of Margaret’s husband John Duncan Fergusson. Jim was proud to have been involved in bringing these two remarkable talents together again under the same roof.

Jim Hastie was well known in so many fields of theatre, dance and performance. He had a wonderful gift of being able to pass on years of experience to a new generation and had a keen eye in correcting and developing the individual dancer. He is sadly missed by his friends in Margaret Morris Movement, the Scottish light entertainments scene as well as former dancers from Scottish Ballet and Scottish Opera.