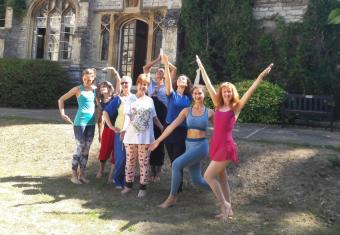 To begin, I am going to look at Margaret’s colours as I discovered them. I found out that I came in to White in the Spring of 1979 and then Yellow in the Summer Term. At Summer School for the first time, Jan Houselander my teacher encouraged me to go into Red as I’d had some dance experience before. To everyone’s surprise I also tried an Advanced workshop that included Green Kangaroo, and the Grasshopper. After that, I realised that this was a challenging and fascinating movement and began Basic in September and progressed through Margaret’s colours to Green in 1988, finally becoming part of the group with whom Jim Hastie devised Magenta.

In the book she wrote My Life in Movement1, Margaret said that she arranged the colours ‘in my order of preference.’ Richard Emerson in Rhythm and Colour2 mentions how in 1920 Margaret jotted down the order of her colours on the back of a programme. I have wondered whether she was inspired by Andrew Lang’s Fairy Books, published in many colours from 1889-1913. The best known is his Lilac Fairy Book (1910). I can’t remember who told me this, or if I elaborated it myself, but I understood that one’s first tunic was White. This was then dyed Yellow, Orange and Red, the colours growing in intensity. By Light Pink one had outgrown this tunic and had a new one made, which could later be dyed Dark Pink and then Crimson. For each of Mauve, Blue and Green a new tunic would be made.

I first saw the actual colours that Margaret chose in 1980 when MMM was invited to perform at the Royal Albert Hall as a guest in the Keep Fit Association’s annual showcase. I was a part of the group, and the circular skirts of our costumes had all Margaret’s colours alternating with panels of white. Beryl Brooks was in charge of purchasing the fabric. She used a Colour wheel made by Margaret, given to her by Jim, to get the ‘right’ colours. She cut them out and made the basic structure to Jim Hastie’s design. I discovered that Margaret’s Emerald Green is a softer colour than I had imagined, more like the sea over sand on a sunny day – perhaps I might call it ‘jade’.

Margaret saw how effective her colours were in performance at a large display in the Royal Albert Hall on the 30th of March 19383a. Her “M.M.M. tunics provided all the colours of the rainbow” They contrasted with those of the international Folk Dance groups and the League of Health and Beauty who wore short black pants and white tops. In her book Creation in Life and Dance3b, she wrote “Although I say so, the overall effect was really quite wonderful.”

Margaret does write about the colour standards in the 1930s MMM magazines. There she focuses on the physical objectives of her colour technique.

The first objectives, Breathing, Posture and Walking, are addressed in White. General Muscle Control, Abdominal exercises and Trunk rotation are also begun in White. Suppleness, Relaxation, Time & Rhythm and Accuracy are further objectives in Yellow. Balance & Spring are objectives in Orange where Time & Rhythm are also further developed; along with these are Continuity and Ease of Movement.

Margaret writes that in Green4 “the dancer’s technique should be as perfect as possible, within the limits of each individual, and both personal style and character of movement fully developed.”

One challenge now is where can we go from what Margaret wrote? How can we include current levels of technique? How can we adapt what she says to include Basic (introduced in 1937)? And what might we say about Magenta (completed in 1996)? What significance can we place on the colours we dance in?

I haven’t come across any writing where Margaret explains the significance of or her feelings about the colours, other than that Green was her favourite and5 “At the bottom was White, for a new student is inevitably colourless”. For me (in line with current thinking) it seems important that each individual brings and develops their own feelings about the colours. This is subject to their previous experience, their cultural heritage and so on. Such an approach avoids rigid or standard interpretations of colours; such as Blue is intellectual, Red is for Passion or White represents purity.

For me the emotional or psychological properties of the colours work both out to the world around me and inwards. I find Margaret’s colours are clear and positive. When I wear them, people respond as if I have cheered up their day. In turn this gives me a warm feeling and improves my self confidence. Students are curious when I wear their colour for class. I tell them it is to help them get the feeling of that colour and the various shades and intensities; it also inspires me too. As a student, I searched endlessly for Magenta clothing; every time I thought I might have found it Beryl Brooks would tell me I was mistaken. I discovered that Magenta is an elusive colour. Eventually it came into fashion and I got a bolero at Marks and Spencer with Magenta written on
the label!

Teaching this summer, I enjoyed immersing myself in Yellow. As well as colour connections, I remembered links with the Yellow exercise ‘Neck rest and Upstretch Breathing’ done in canon in a film that I’d viewed at the British Film Institute –a way of seeing an exercise anew. I found music with Yellow or sunshine or gold in the title. I also remembered that in Yellow we have those strange, side-tilted Posture Walks and the special exercises that Margaret had created to help Phyllis Calvert with her lordosis and scoliosis6. When it came to my Creative class I explored other ways of finding Yellow in the world outside as well as using large pieces of yellow fabric to improvise in two-dimensional space.

Going home from Summer School, this continual focus on Yellow had affected my perception. Yellow outfits were in fashion, yellow cranes towered over me, I saw more yellow piping, yellow was warning me on road signs, yellow cars were coming at me… And yesterday a new book on Lucia (Joyce) was an even brighter lemon yellow!

To read more about Summer School 2018 and view the video of Yellow Neck Rest, click here or find us on Youtube